Selection of photos taken while David was on stage with his different musical projects. 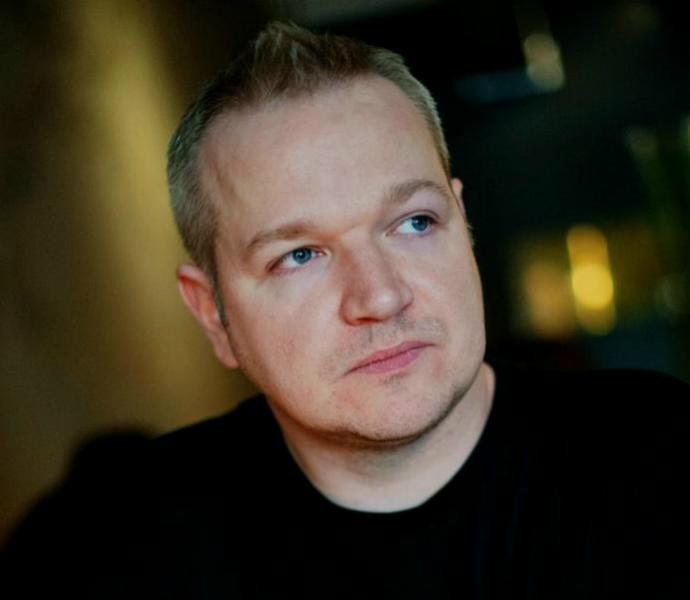 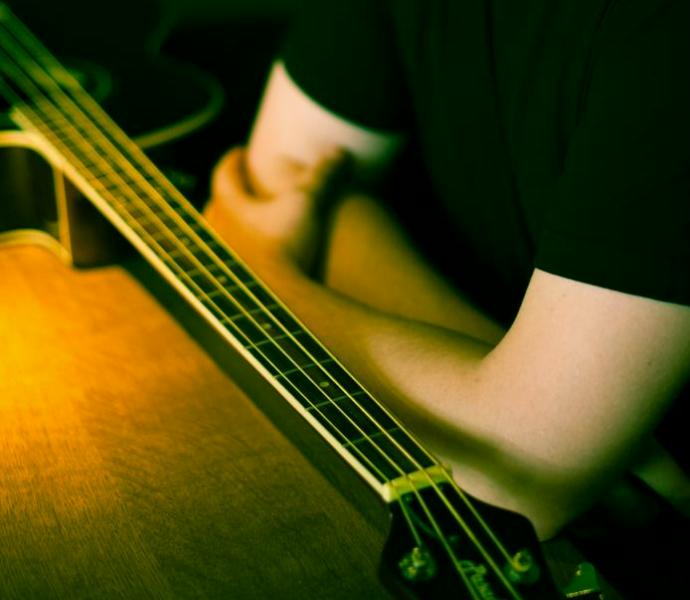 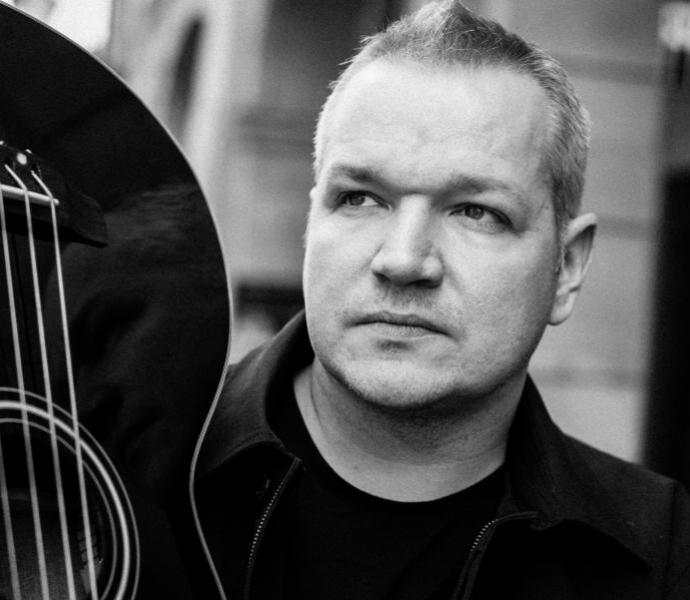 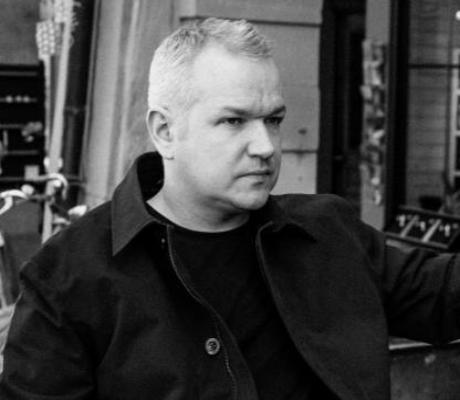 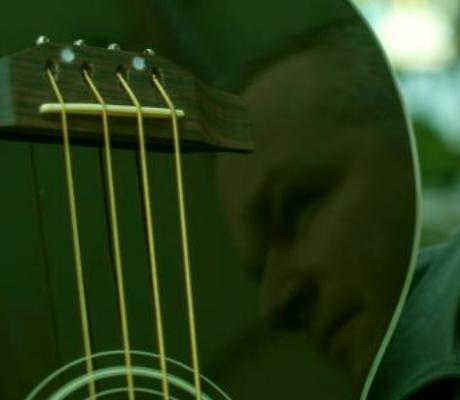 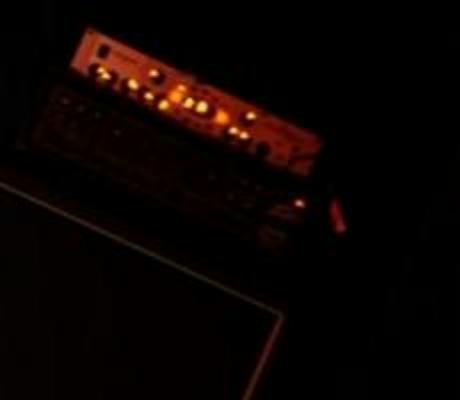 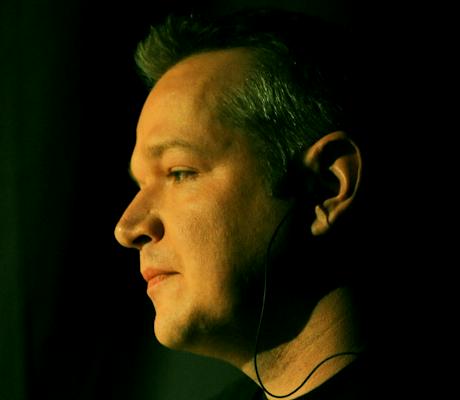 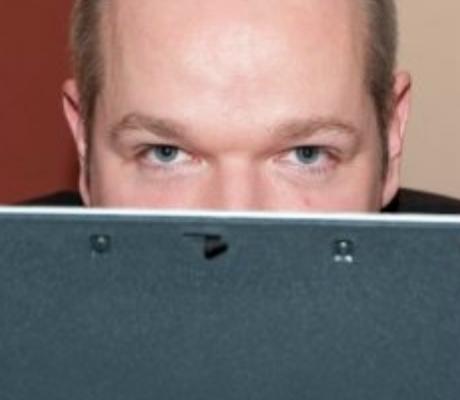 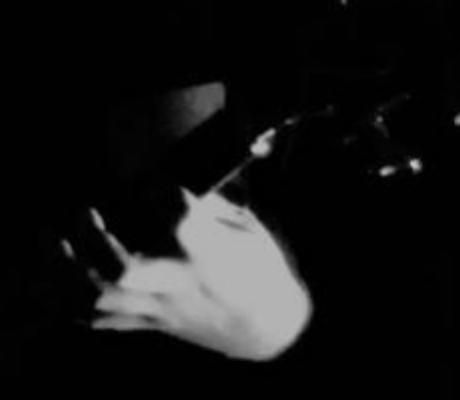 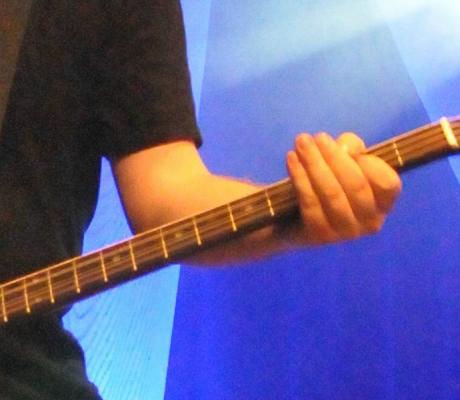 Besides bemol here is a chronological selection of bands who David has played with.
— Numquam (bass/vocals): this was David's first serious group, co-founded in 1993.
— Laugh (synthesizer/guitar): the band toured widely in Switzerland. A demo tape was released in 1993 and a CD in 1994; he left in the Summer of 1995.
— Nous Subterfuge (bass): David created this two-some in 1996. A CD was released in April 1998. They took part in a compilation CD in 1999.
— Pictures of you (piano/vocals): David re-arranged and adapted songs by The Cure for the piano. Live performances were held in London and in Bern.
— Olm (bass/backing vocals): two CD were recorded and six concerts played between November 2005 and March 2009.
— Shotgun Weddings (bass): the band started on the ashes of Olm and ended after about 20 months of activity. A CD was released in June 2013.
— YannB (synthesizer): David joined his friend Yann in April 2009 for three concerts.
— Draven (bass): the band was looking for a bass player for their 2010/2011 tour and asked David to join.
— Halocline (bass/synthesizer): David joined the band in April 2013. They played at a festival in May and two concerts in England in September 2013.

David was born in April 1975. His passion for music started with the piano in February 1982. More than 30 years of classical training have given David a solid musical grounding.

In 1987, attracted by the modern music of groups such as Joy Division, The Cure, Nine Inch Nails, or And Also The Trees, he bought his first synthesizer. 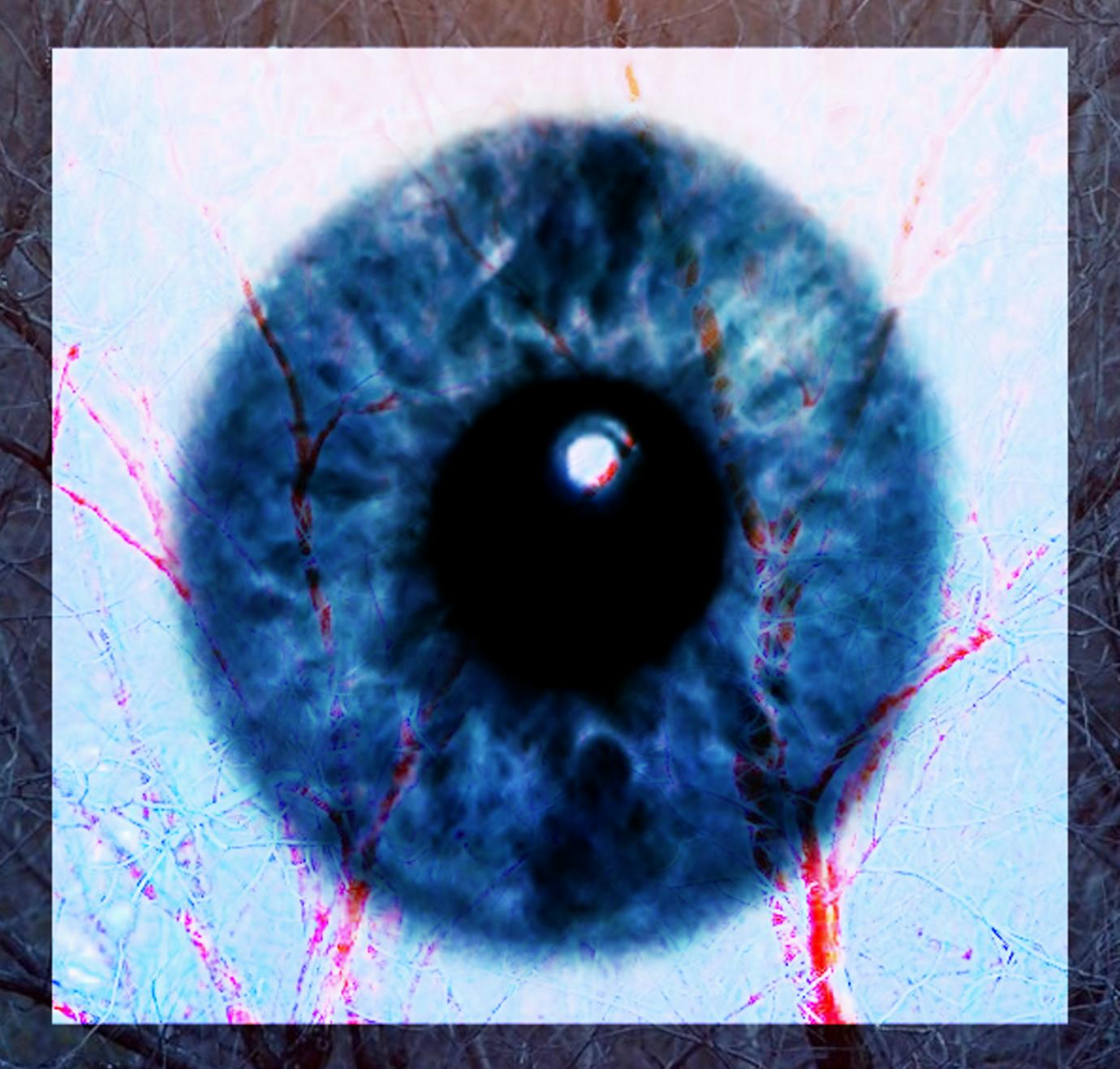 The same year, he created his first band, Lokranov. At the beginning David sang and played the synthesizer in this dark-wave group for two years.

The band Numquam was David (bass), Oscar (guitar) and Pierre (drums). They started to play together in 1993. All three members sang as well. With this band, David played the bass onstage for the first time. José joined one year later as the band's second bass player. The band ended in 1995.

In the early 90s, the new-wave band Laugh needed a new keyboard player and asked David to join in. Laugh won a competition for the best Swiss rock group of 1993/1994, and followed this with a national tour. They spent one week recording their first CD single in a studio in 1994. David left the band a year later.

In parallel, his classical piano training enabled David to enter a musical performance competition in 1993 where he won first prize. 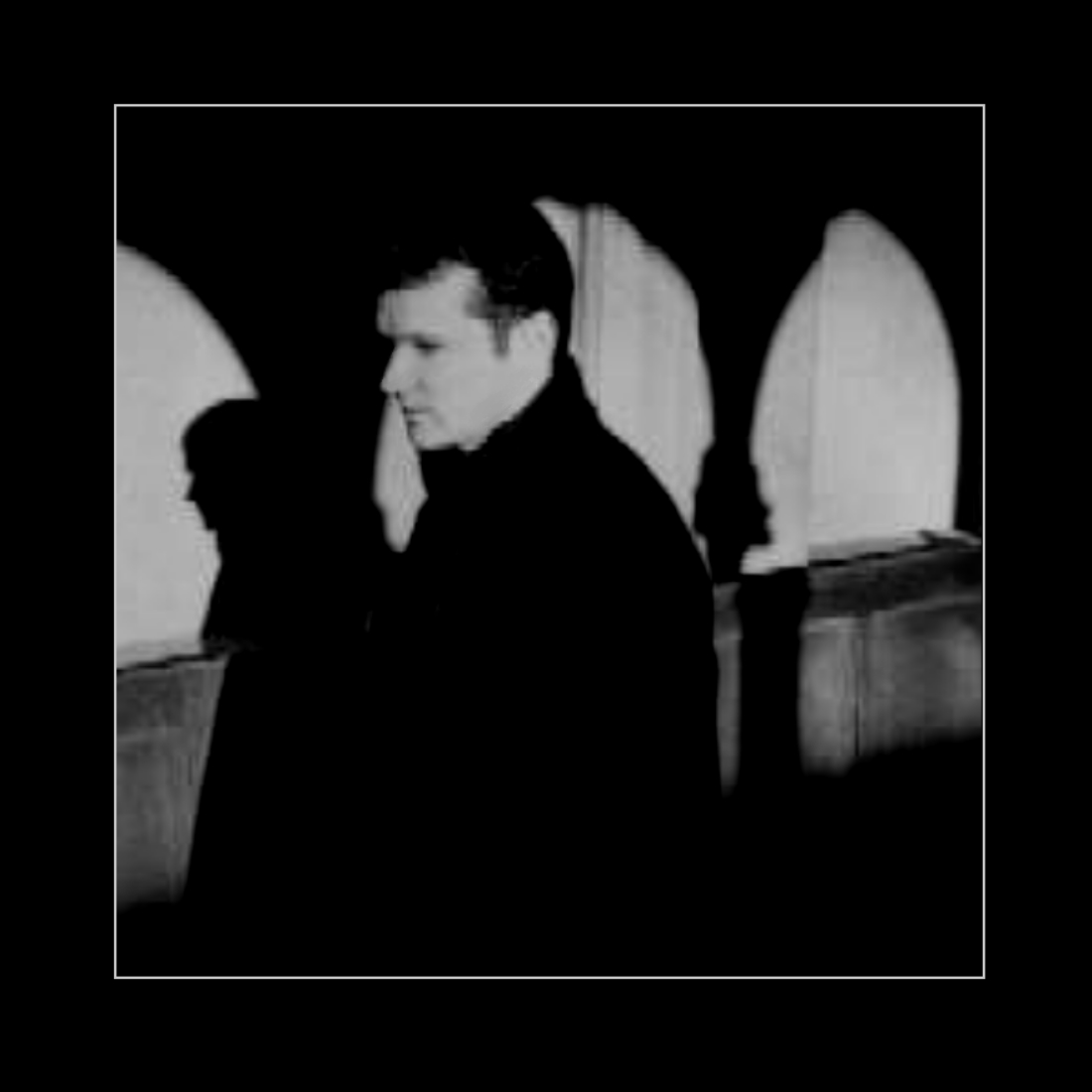 Nous Subterfuge started mid-March 1996. The band was formed by David (bass) and his childhood friend and schoolmate Pierre (drums). Less than six months later, they were performing at a festival in Neuchâtel (Switzerland). On several occasions they played live, supporting for Double Nelson (France) and Penthouse (UK). Nous Subterfuge recorded a CD after Christmas 1997 and took part in a compilation CD that was released in the USA in Autumn 1999. Nous Subterfuge ended in November 1999.

Year 2000 brought a big change in David's musical life. Pierre, who used to play with David since the very beginning, stopped playing the drums.

David met drummer Fabio in Autumn 2000. Joined in 2004 by guitarist Remo, they named their project Olm, with André as lead singer. When the latter left, the three remaining members renamed the band Shotgun Weddings and kept on playing instrumentally for a couple of years. Singer Simone completed the line-up of Shotgun Weddings in January 2012. December 2012 and January 2013 were spent recording a CD single that was released in June the same year. The band ended in Autumn 2013.

Since the late 80s, David has re-arranged and adapted songs by The Cure for the piano. This project, Pictures of you, was named after the song by The Cure. The first live acts were half a dozen private concerts held between Spring 1991 and Summer 1994 in Neuchâtel. In February 2009, an important show was held in London (UK), as it was David's first concert abroad. He played another concert during the first week of January 2010 in Bern.

In April 2009, David joined friend and musician YannB for three memorable gigs, including an acoustic show and the opening act for Polar in Fribourg (Switzerland) — Dave Allen, producer of The Cure, attended this concert.

In September 2010, David was asked to play the bass in the nu-metal band called Draven. Between November 2010 and April 2011, they toured mostly in and around Bern (Switzerland).

In November 2013, David played the bass with the band Fakir in Basel (Switzerland) supporting the band Vive la fête (Belgium).

In April 2013, David joined Halocline, in which he alternatively played the bass and the synthesizer. David played his first concert with this band in May 2013. Two concerts were held in London and Crawley (UK) in September 2013.

In Summer 2014, David decided to focus more on bemol.

Currently David is looking for musicians for a new musical project (beside bemol). Stay tuned...